1. Why alerts are provided while verifying the EWB by officer? 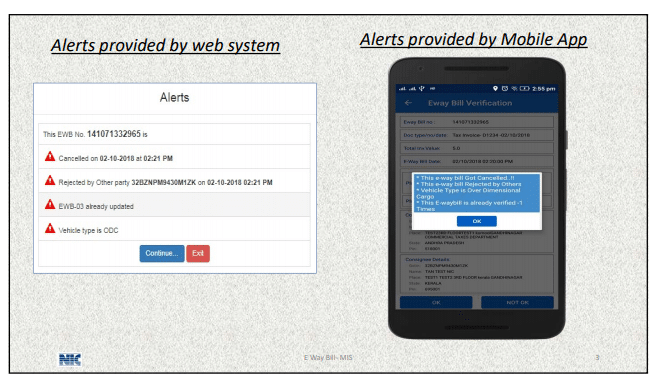 – When the officer intercepts the vehicle but the person-in-charge of the conveyance will not produce the EWB immediately and asks for some time, then it indicates that he may not have the EWB and may generate now. Now, the officer can record on the system that conveyance is not having the EWB right now.
After few minutes, the person-in-charge of conveyance brings the EWB. Now, the officer can check the time of generation of EWB and updation of the Part-B of the EWB. If time of updation of one of them is greater than the time of recording by the officer as ‘No E-way Bill’, then it indicates that EWB is generated after stopping the conveyance. Hence the officer can take the action as per the procedure. The action of the officer can be proved legally as he has recorded the ‘No E-way bill’ on
the system and if the mobile app is used, the system will capture the GPS details of the location, where it has been recorded.

List of states which have mapped the offices to Division 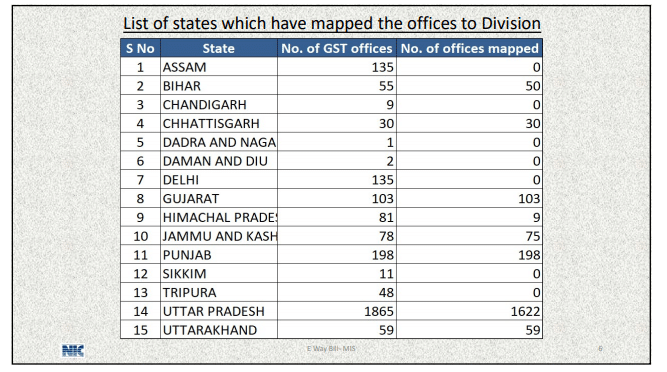 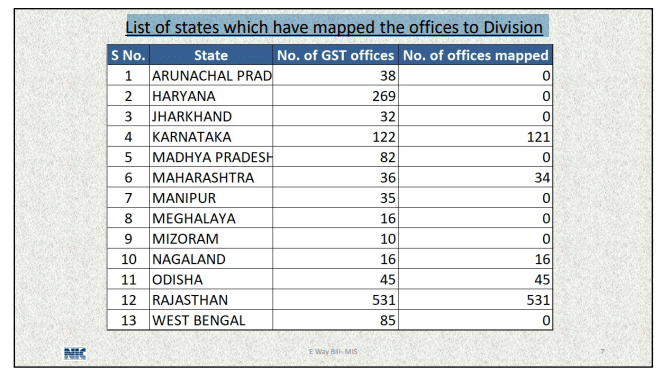 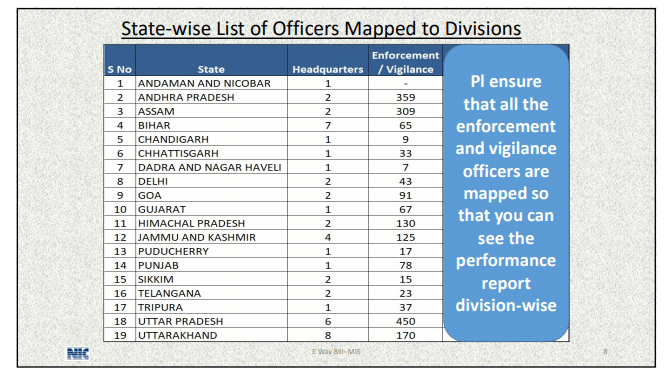 •Officers can extract the report data in excel by using the “Export to Excel” option provided
under respective Intelligence Reports provided in the main menu of e-Way Bill MIS .

5. How to get public IP Address of EWB generated by GSTIN?

– The Public IP address, used for the generation of EWB by the tax payer, is sometimes required to the department, whenever the enforcement activity is carried out against the said tax payer. The public IP address will help in proving from which location he has generated EWB under legal framework.
This option is available only for Nodal officer of the state. The Nodal Officer can get public IP address of EWB generated by GSTIN by using the ‘IP Address’ sub-option provided under “Admin” option of the EWB MIS main menu. Officer can get the IP Address of the tax payer by entering either his GSTIN or entering the EWB No. of EWB generated by the tax payer. 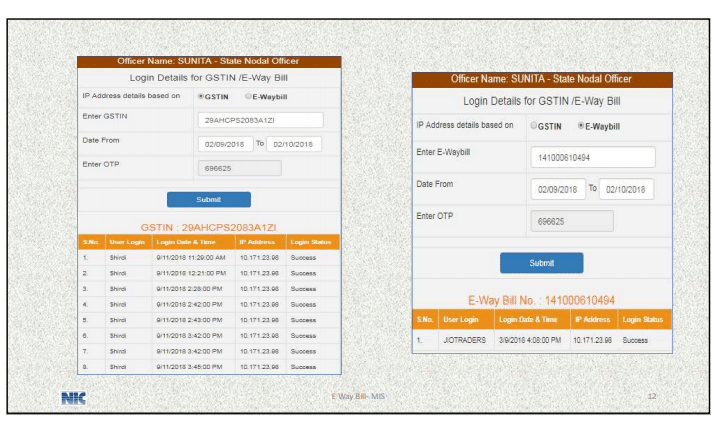 6. Who can get the public IP Address of EWB generated by GSTIN?

• Only the Nodal officer of the state can get the Public IP Address of the tax payers.

• He should take written approval of the Commissioner before generating the same for any tax payers and maintain the file.

• For this he has to provide his static IP and

• This will be enabled only for this static IP shared by him.

7. Who can get the excel dump of e way bill data?

• Commissioner has to identify the Nodal Officer and communicate his details i.e. Name, Designation, Mobile No. , email id etc. to NIC for getting the required excel dump.

• Nodal officer has to share his static IP address to get the excel dump.

• Based on the static IP Address received, NIC will communicate user credential of SFTP system to the Nodal Officer to download the excel dump.

• Month-wise excel dump will be provided to the respective state folders in the system.

8. How to enter EWB-03 if one conveyance is carrying multiple EWBs?

• The officer has to separately enter the EWB-03 for each e-Way Bill if the conveyance is carrying the multiple EWBs. This is because each EWB or consignment will have different consignor and
consignee. Whatever action is initiated against the parties, it needs to be linked to the concerned
consignor and consignee in ledger of the GST Common Portal.

9. How to enter the details of goods in Part-B of EWB-03 if multiple goods have to be entered?

• Entry form for EWB-03 has been simplified by enabling entry of one main commodity as most of the type one commodity will be there. If the officer has the case where he needs to enter multiple
commodities, then he has to enter the main commodity HSN in the respective column and
remaining details in ‘Actual description of goods’ column.

10. Who can use the dashboards?

•All the officers above the rank of Joint Commissioner can login and view the dash board reports.

• EWB MIS module provides role based access to various inbuilt reports to the respective officers based on their level in the hierarchy and functionalities. Following table lists the menu options enabled for different level of officers 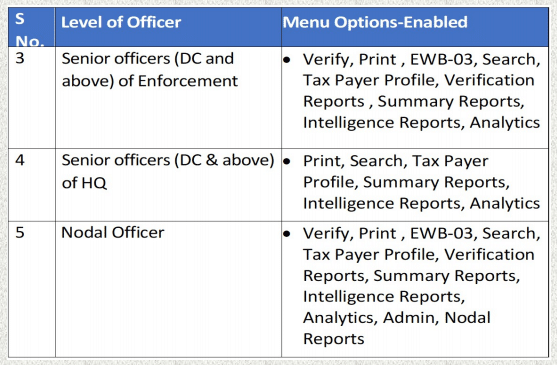 12. Where to get list of tax payers/ transporters registered on the EWB portal?

• The Nodal Officer can get the list of tax payers, registered on the EWB portal, by using “EWB TXP/TRN Reg.” sub-option provided under ‘Nodal Reports’ option.

13. Can I get list of registered or un-registered tax payers on EWB portal?

• The circle/ward Officer can get the list of his/her tax payers, who have registered or not registered on the EWB portal, by using “EWB TXP/TRN Reg.” sub-option provided under ‘Summary Reports’ option. (This report will be available after 15th Oct 2018)

14. Why location details are asked before verification?

In case the transporter/tax payer is illegally using the same e-Way Bill multiple times for shipping their consignments, previous verification place details for the concerned e-Way Bill will help the officer in identifying the e-Way Bill recycling in such cases and will provide a basis to him
to take appropriate action against the dealer if required.

15. Why Intelligence reports are limited for few days only?

16. Why access rights to all the Intelligence reports are provided only to enforcement Joint Commissioners?