GST Council in its 31st meeting recommended introduction and implementation of a new GST Return System in a phased manner from October 2019 to facilitate taxpayers.

In the new GST Return System, there will be three main components to the new return –

From October 2019 onwards, the current FORM GSTR-1 will be replaced by FORM GST ANX-1.

The large taxpayers whose aggregate annual turnover in the previous Financial year
was more than Rs. 5 Crore will upload their monthly FORM GST ANX-1 from October 2019 onwards.

However, the small taxpayers whose aggregate annual turnover in the previous
financial year was upto Rs. 5 Crore will upload their first quarterly FORM GST ANX-1 only in January 2020 for the quarter October to December 2019.

Invoices, etc., can be uploaded in FORM GST ANX-1 on a continuous basis both by large and small
taxpayers from October 2019 onwards.

For October and November, 2019, large taxpayers will continue to file FORM GSTR-3B on monthly basis. they will file their first FORM GST RET-1 for the month of December 2019 by 20th January 2020.

The small taxpayers opting to file FORM GST RET-1 on a quarterly basis will stop fiing FORM GSTR-3B and will start filing FORM GST PMT-08 from October 2019 onwards. they
will file their first FORM GST-RET-1 for the quarter October 2019 to December 2019 by 20th January 2020.

The periodicity of fling return in FORM GST RET-1 will be deemed to be monthly for all taxpayers unless quarterly fling of the return is explicitly opted for by small taxpayers. The aggregate
annual turnover of newly registered taxpayers will be considered as zero and they will have the option to file a quarterly return.

In addition, small taxpayers can choose to file , instead of Form GST RET -1 , any of the other two new quarterly returns , namely sahaj (Form GST RET -2) and Sugam (FORM GST RET -3)

Small Taxpayers opting to file the return on quarterly basis are required to pay tax, either by cash or credit or both, on monthly basis on the taxable supplies made during the month by filing FORM GST PMT – 08 for the first two months of the quarter. Tax must be paid by 20th of the month succeeding the month which the tax liability pertains to. 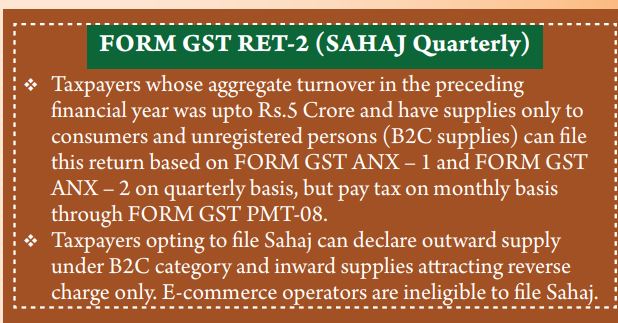 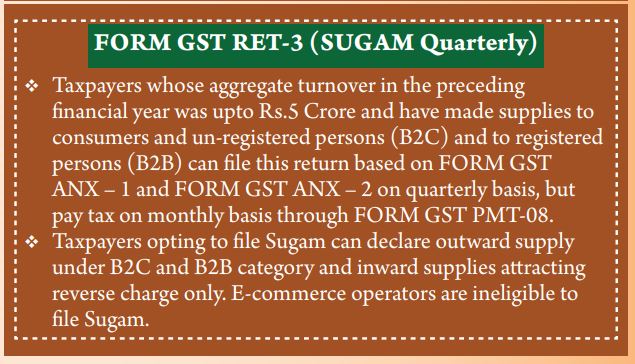 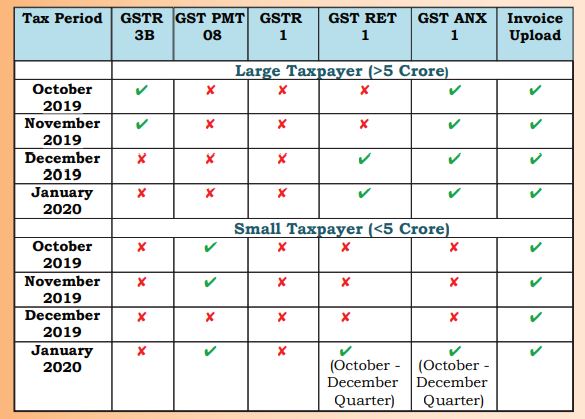