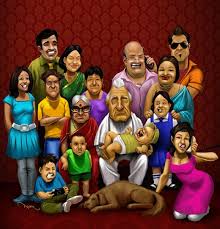 What is the meaning of HUF in the Income tax Act ?

HUF means Hindu Undivided Family . A HUF is a distinct entity for the purpose of tax and it is included in the definition of a person in section 2(31) of the Income-tax Act

Who is coparcener  in the HUF ?

Son becomes a member/coparcener of the HUF by birth.

The Hindu Succession (Amendment) Act, 2005, has given daughters the same rights and liabilities in the Mitakshara coparcenary property as the sons. Consequently, a daughter is now recognised as a coparcener and gets interests in the coparcenary property of the father’s family by birth. This change applies to all daughters, including those born/married prior to 9 September, 2005.

Who is Karta in HUF ?

In an HUF the eldest coparcener in the family is called karta, who manages the affairs of the family.

CIT v. Laxmi Narayan Raghunathdas AIR 1949 Nag. 128 – A widow can be karta in the absence of adult male members of the family.

The daughter, being a coparcener, can now become karta of her father’s family after The Hindu Succession (Amendment) Act, 2005 coming into force from 9 September, 2005.

Can the daughter continue to be coparcener in her father HUF even after she is married ?

Yes , daughter continues to be the coparcener in her father’s HUF even after she gets married and forms another HUF with her husband

What are the various tax benefit available to HUF ?

If you have ancestral property and earning some income from this property, then it is better to transfer this asset to HUF and save tax up to exemption limit applicable to individual . The same tax slabs are applicable to HUF as to individual assessee .

Where the HUF pays any sum to the member of HUF , whether same is taxable ?

For getting exemption under section 10(2), two conditions are to be satisfied. Firstly, he is a member of HUF and secondly he receives the sum out of the income of suchHUF, may be of earlier year.

How to create an HUF for the purpose of Income tax Act ?

HUF is a creature of law. It confers a status on its members which can be acquired by birth in the family or by marriage to a male member of the family.

HUF is automatically created when marriage of male takes place as per Hindu Law. The Supreme Court in Gowli Buddanna v. CIT [1966] 60 ITR 293 held that to constitute a joint Hindu family, it is not necessary that there has to be more than one coparcener in the family; a husband and wife can validly constitute a HUF. So after the marriage you can apply for a PAN of HUF.

In N.V. Narendranath v. CWT [1969] 74 ITR 190 , the Supreme Court has observed that the HUF in tax statutes has the same meaning as Hindu joint family under Hindu Law.

The common understanding of HUF is that it is a creature of law and it cannot be constituted by the acts of parties. Thus, two brothers cannot join together to say that they have constituted a HUF.  This way they can only form a partnership firm or AOP.

In Surjit Lal Chhabda v. CIT [1975] 101 ITR 776, the Supreme Court has confirmed this view by saying that a HUF with all its incidents, is a creature of law and cannot be created by acts of parties except to the extent to which a stranger may be affiliated to the family by adoption. But the absence of an antecedent history of jointness between a person and his ancestors is no impediment to the person (appellant before the S.C.), his wife and unmarried daughter forming a Joint Hindu Family.

Following are the judgements in case of HUF  :

(i) A joint family can consist of a single male member and widows of deceased male members and the income-tax law does not require that aHUF, for being an assessable entity must consist of at least two male members – Gowli Buddanna v. CIT [1966] 60 ITR 293 /296 (SC) [Alsosee Surjit Lal Chhabda ( supra)].

( iii)More than one person is required to constitute a HUF. A male surviving member of HUF (unmarried) or widower cannot form a HUF.

( iv)A HUF can consist of two female members without any male member – CIT v. RM.AR.AR. Veerappa Chettiar [1970] 76 ITR 467 (SC). However, this legal position has now to be considered in the background of the Hindu Succession Act, 1956. Prior to the coming into force of this Act, even though a Hindu family might consist of only the widow of sole coparcener and his minor unmarried daughter, yet the family would continue to be a HUF because the widow, being a potential mother, could always adopt a son to her deceased husband and thereby continue the line. The Hindu Succession Act has, however, introduced far-reaching changes in the structure of Hindu Law of inheritance and succession, and a Hindu widow, by virtue of section 14 of that Act, may become a “fresh stock of descent” as the absolute owner of the property but as she has become the full owner of her husband’s property, her children, if any, by her first husband, her adopted son, if she cares to adopt, and her children if she gets married again, may form one joint family but none of them can have any right, by birth in her property and, hence, the HUF as ordinarily understood in Hindu Law cannot be brought into existence – Rukmini Bai Rathor v.CWT [1964] 54 ITO 430 (Ori.).

Can the HUF be created by Will ?

HUF can be created by Will. The Punjab and Haryana High Court in CIT v. Ghanshyam Das Mukim [1979] 118 ITR 930 , has said that a valid Will can be made in favour of the HUF. In this case, the mother of Ghanshyamdas left a Will and provided therein for passing of certain properties to the HUF of his son who had only wife and a daughter at that time. The Court not only held that there could be a valid Will in favour of the HUF but also rejected the contention of the revenue that no HUF could be created by Will. It was further held that it was not necessary for the creation of a Hindu Undivided Family that there must be in existence already a nucleus of Hindu Undivided Family property as joint and undivided family is the property of a joint Hindu family. This conclusion was drawn by the Honourable Court by relying on the Supreme Court decision in the case ofSurjit Lal Chhabda

What happens if a member of a Hindu undivided family  transfer his  property  into the HUF or HUF receive any sum from member ?

In this case the income derived from the converted property or any part thereof shall be deemed to arise to the individual and not to the family / HUF as per the following section 64(2) of the income tax Act which read as follow :-

Where, in the case of an individual being a member of a Hindu undivided family, any property having been the separate property of the individual has, at any time after the 31st day of December, 1969, been converted by the individual into property belonging to the family through the act of impressing such separate property with the character of property belonging to the family or throwing it into the common stock of the family or been transferred by the individual, directly or indirectly, to the family otherwise than for adequate consideration (the property so converted or transferred being hereinafter referred to as the converted property), then, notwithstanding anything contained in any other provision of this Act or in any other law for the time being in force, for the purpose of computation of the total income of the individual under this Act for any assessment year commencing on or after the 1st day of April, 1971,—

(a) the individual shall be deemed to have transferred the converted property, through the family, to the members of the family for being held by them jointly ;

(b) the income derived from the converted property or any part thereof shall be deemed to arise to the individual and not to the family ;

Explanation 1.—For the purposes of sub-section (2),—

Explanation 2.—For the purposes of this section, “income” includes loss.

How member of HUF  can save tax on the property transferred into HUF Property ?

If a member of the HUF throws his money into the common pool or the family hotchpot than section 64(2)  tax the Income earned by the HUF on that money in the individual member’s hands only.

What is the care that needs to be taken care after creation of HUF ?

After the HUF is created steps need to be taken to keep the HUF’s affairs completely distinct from the individual members’ affairs.

Where the members of the HUF carry on their individual businesses, as they normally do, the distinction between what constitutes the individual’s income and what isHUF’s income  need to be clearly established .

After obtaining the PAN for HUF, apply for HUF Bank account and deposit all the proceed belonging to HUF into this separate Bank account of HUF

When is it mandatory to file return of income for HUF ?

I am a resident HUF having signing authority in an account located abroad and own assets located abroad. Whether e-filing of return of income is mandatory?

I have an HUF  and have income from source outside India. Whether I can file my income-tax return in paper mode?

E-filing of return of income is mandatory HUF having income from any sources outside India.