EXPLANATORY NOTES ON PROVISIONS OF THE INCOME DECLARATION SCHEME, 2016 AS PROVIDED IN CHAPTER IX OF THE FINANCE ACT, 2016

The Income Declaration Scheme, 2016 (referred to here as ‘the Scheme’) is contained in the Finance Act, 2016, which received the assent of the President on the 14th of May 2016.

2. The Scheme provides an opportunity to persons who have paid not full taxes in the past to come forward and declare the undisclosed income and pay tax, surcharge and penalty totalling in all to forty-five per cent of such undisclosed income declared.

Scope of the Scheme

3. A declaration under the aforesaid Scheme may be made in respect of any income or income in the form of investment in any asset located in India and acquired from income chargeable to tax under the Income-tax Act for any assessment year prior to the assessment year 2017-18 for which the declarant had, either failed to furnish a return under section 139 of the Income-tax Act, or failed to disclose such income in a return furnished before the date of commencement of the Scheme, or such income had escaped assessment by reason of the omission or failure on the part of such person to make a return under the Income-tax Act or to disclose fully and truly all material facts necessary for the assessment or otherwise. Where the income chargeable to tax is declared in the form of investment in any asset, the fair market value of such asset as on 1st June, 2016 computed in accordance with Rule 3 of the Income Declaration Scheme Rules, 2016 shall be deemed to be the undisclosed income.

Rate of tax, surcharge and penalty

6. As per the Scheme, declaration is to be made in such form and shall be verified in such manner as may be prescribed. The form prescribed for this purpose is Form 1 which has been duly notified. The table below mentions the persons who are authorized to sign the said form: 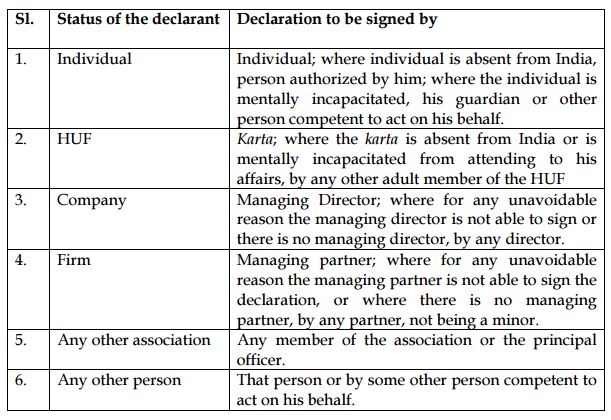 Declaration not eligible in certain cases

7. As per the provisions of the Scheme, no declaration can be made in respect of any undisclosed income chargeable to tax under the Income-tax Act for assessment year 2016-17 or any earlier assessment year in the following cases—

In the form of declaration (Form 1) the declarant will verify that no such notice has been received by him on or before 31st May, 2016.

A person in respect of whom proceedings for prosecution of any offence punishable under Chapter IX (offences relating to public servants) or Chapter XVII (offences against property) of the Indian Penal Code or under the Unlawful Activities (Prevention) Act or the Narcotic Drugs and Psychotropic Substances Act or the Prevention of Corruption Act are pending shall not be eligible to make declaration under the Scheme.

A person notified under section 3 of the Special Court (Trial of Offences Relating to Transactions in Securities) Act or a person in respect of whom an order of detention has been made under the Conservation of Foreign Exchange and Prevention of Smuggling Activities Act, subject to the conditions specified in the Scheme, shall also not be eligible for making a declaration under the Scheme.

Circumstances where declaration shall be invalid

8. In the following situations, a declaration shall be void and shall be deemed never to have been made:-

(b) Where the declaration has been made by misrepresentation or suppression of facts or information.

Where the declaration is held to be void for any of the above reasons, it shall be deemed never to have been made and all the provisions of the Income-tax Act, including penalties and prosecutions, shall apply accordingly.

Any tax, surcharge or penalty paid in pursuance of the declaration shall, however, not be refundable under any circumstances.

9. Where a valid declaration as detailed above has been made, the following consequences will follow:

(a) The amount of undisclosed income declared shall not be included in the total income of the declarant under the Income-tax Act for any assessment year;

(b) The contents of the declaration shall not be admissible in evidence against the declarant in any penalty or prosecution proceedings under the Income-tax Act and the Wealth Tax Act;

(d) The value of asset declared in the declaration shall not be chargeable to Wealth-tax for any assessment year or years.

(e) Declaration of undisclosed income will not affect the finality of completed assessments. The declarant will not be entitled to claim re-assessment of any earlier year or revision of any order or any benefit or set off or relief in any appeal or proceedings under the Income-tax Act in respect of declared undisclosed income or any tax, surcharge or penalty paid thereon.

Deputy Secretary to the Government of India