Only DG Investigation and Commissionerates TDS authorised to have power to order income tax survey u/s 133A with effect from 13th August, 2020.

With the launch of the Faceless Assessment Scheme, 2019, the Income-tax Department is moving towards minimal interface with the taxpayers, aiming at significant improvement in delivery of services and greater transparency in the working of the department. The survey action u/s 133A of the Act being an intrusive action, it is expected that the same should be carried out  with utmost responsibility and accountability.

2. In furtherance of the above, the Central Board of Direct Taxes, in exercise of powers under section 119 of the Income-tax Act, 1961 (hereinafter referred to as the Act) hereby directs that the officers posted in Directorates of Investigation (Investigation Wing) and Commissionerates of TDS, only and exclusively shall act as Income­ tax Authority” for the purposes of power of survey under section 133A of the Income-tax Act.

3. The competent authority for approval of such survey action u/s 133A of the Act shall henceforth be DGIT (lnv) for investigation wing and Pr.CCIT/CCIT (TDS) for TDS charges, as the case may.

(Prajna Paramita)
Director to the Government of India 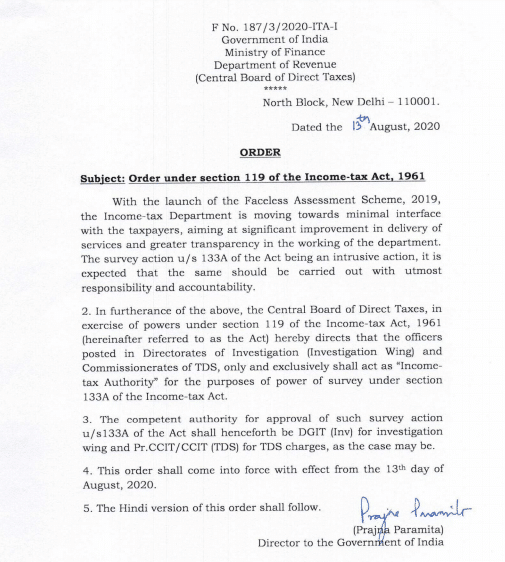