S.O. 2133(E).—In exercise of the powers conferred by sub-section (1) of Section 41 read with section 35 of the Foreign Contribution (Regulation) Act, 2010 (42 of 2010) and rule 17 of the Foreign Contribution (Regulation) Rules, 2011 and in supersession of the notification of the Government of India in the Ministry of Home Affairs number S.O. 1070(E), dated the 26th April, 2013, published in the Gazette of India, Extraordinary, Part-II, Section 3, Sub- Section (ii), except as respects things done or omitted to be done before such supersession, the Central Government hereby notifies that officer specified in column (4) of the table below, may, before institution of any prosecution under this Act, compound the offences specified in column (2), on payment of the amount specified in column (3), of the said table, namely:— 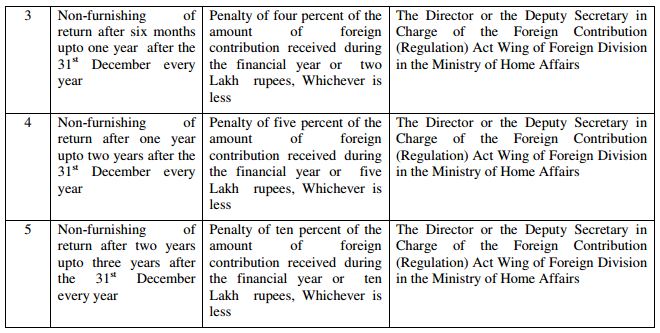