Seeks to extend the last date for filing the return in FORM GSTR-3B for the months of August to December, 2017 vide Notification No 35/2017 Central Tax 15th September, 2017

[To be published in the Gazette of India, Extraordinary, Part II, Section 3, Sub-section
(i)]
Government of India
Ministry of Finance
Department of Revenue
Central Board of Excise and Customs

G.S.R. …..(E).— In exercise of the powers conferred by section 168 of the Central Goods and Services Tax Act, 2017 (12 of 2017) read with sub-rule (5) of rule 61 of the Central Goods and Services Tax Rules, 2017 and notification No. 21/2017-Central Tax dated the 08th August, 2017 published in the Gazette of India, Extraordinary, Part II, Section 3, Sub-section (i) vide G.S.R. number 997 (E), the Commissioner, on the recommendations of the Council, hereby specifies that the return for the month as specified in column (2) of the Table below shall be furnished in FORM GSTR-3B electronically through the common portal on or before the last dates as specified in the corresponding entry in column (3) of the said Table, namely:- 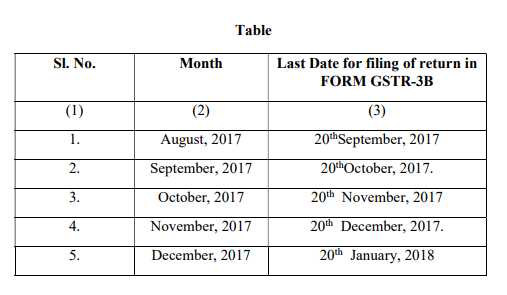 2. Payment of taxes for discharge of tax liability as per FORM GSTR-3B: Every registered person furnishing the return in FORM GSTR-3B shall, subject to the provisions of section 49 of the said Act, discharge his liability towards tax, interest, penalty, fees or any other amount payable under the said Act by debiting the electronic cash ledger or electronic credit ledger, as the case may be, not later than the last date, as detailed in column (3) of the
said Table, on which he is required to furnish the said return.