Seeks to extend the due dates for the furnishing of FORM GSTR-1 for those taxpayers with aggregate turnover of more than Rs.1.5 crores vide Notification No 58/2017 Central Tax Dated 15th November, 2017

[ Above Notification Superseded : Extends the due dates for monthly furnishing of FORM GSTR-1 for taxpayers with aggregate turnover of more than Rs.1.5 crores  and defer the date of filing GSTR 2 and GSTR 3 vide Notification No 72/2017 Central Tax Dated 29th December, 2017 ]

[To be published in the Gazette of India, Extraordinary, Part II, Section 3, Sub-section (i)]
Government of India
Ministry of Finance
(Department of Revenue)
[Central Board of Excise and Customs]

G.S.R. (E):— In exercise of the powers conferred by the second proviso to subsection (1) of section 37 read with section 168 of the Central Goods and Services Tax Act, 2017 (12 of 2017) (hereafter in this notification referred to as the Act) and in supersession of notification No. 30/2017 – Central Tax dated the 11th September, 2017, published in the Gazette of India, Extraordinary, Part II, Section 3, Sub-section (i), vide number G.S.R 1144 (E), dated the 11th September, 2017, except as respects things done or omitted to be done before such supersession, the Commissioner, on the recommendations of the Council, hereby extends the time limit for furnishing the details of outward supplies in FORM GSTR-1 under sub-section (1) of section 37 of the Act for the months as specified in column (2) of the Table, by such class of registered persons having aggregate turnover of more than 1.5 crore rupees in the preceding financial year or the current financial year, till the time period as specified in the corresponding entry in column (3) of the said Table, namely:- 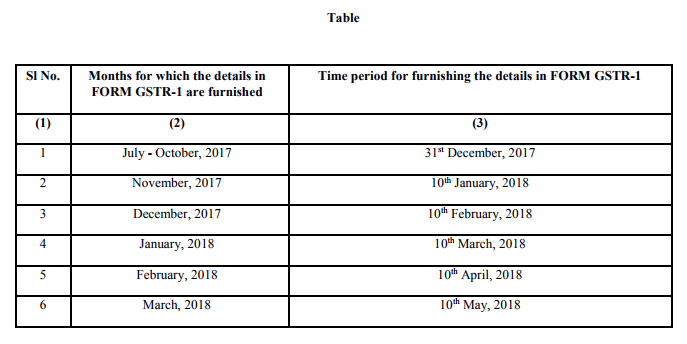 2. The extension of the time limit for furnishing the details or return, as the case may be, under sub-section (2) of section 38 and sub-section (1) of section 39 of the Act, for the months of July, 2017 to March, 2018 shall be
subsequently notified in the Official Gazette.

(Dr.Sreeparvathy S.L.)
Under Secretary to the Government of India