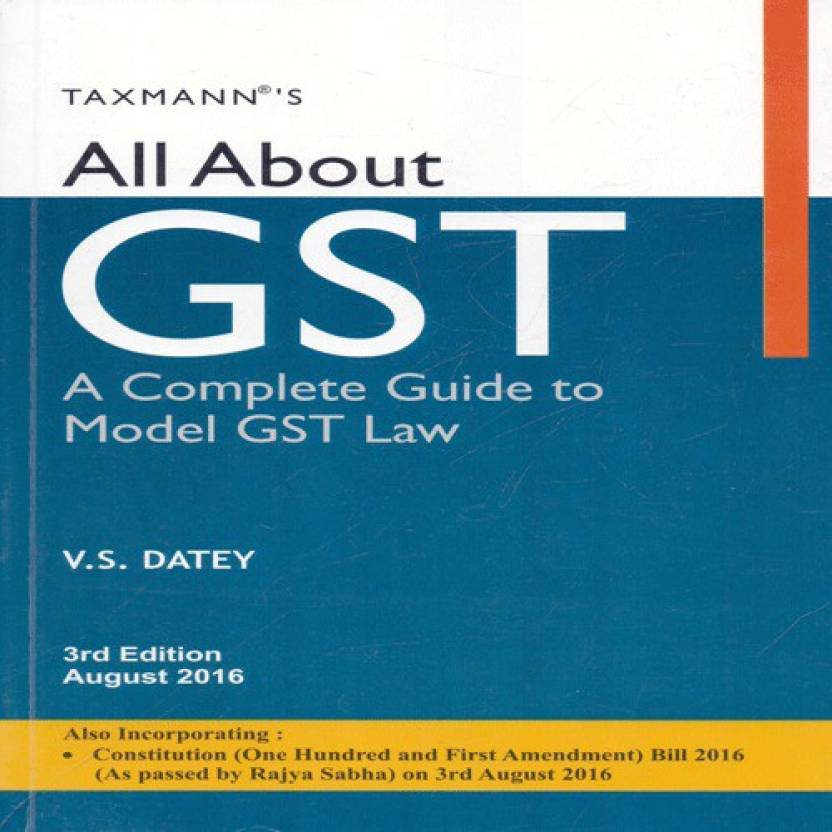 Refund of tax and interest under GST

Any person claiming refund of any tax and interest, if any, paid on such tax or any other amount paid by him, may make an application in that regard to the proper officer of IGST/CGST/SGST before the expiry of two years from the relevant date in prescribe form and manner – clause 38(1) of GST Model Law, 2016.

The limitation of two years shall not apply where such tax or interest or the amount referred to above has been paid under protest.

Refund includes refunds on input taxes paid on exports and deemed exports – “Refund” includes refund of tax on goods and/or services exported out of India or on inputs or input services used in the goods and/or services which are exported out of India, or refund of tax on the supply of goods regarded as deemed exports, or refund of unutilized input tax credit – Explanation A to clause 38 of GST Model Law, 2016.

“Export of goods” with its grammatical variations and cognate expressions, means taking out of India to a place outside India – clause 2(41) of GST Model Law, 2016.

“Deemed exports”, as notified by the Central Government/State Government on the recommendation of the Council, refer to those transactions in which the goods supplied do not leave India, and payment for such supplies is received either in Indian Rupees or in convertible foreign exchange – clause 2(37) of GST Model Law, 2016.

Doctrine of unjust enrichment in case of refund of GST

This will be ‘unjust enrichment‘ of supplier.

Unjust enrichment – A benefit obtained from another, not intended as a gift and not legally justifiable, for which the beneficiary must make restitution or recompose – Indian Council for Enviro-Legal Action v. UOI (2011) 8 SCC 161

Refund, if any, should be paid to customer who has borne the burden of GST. However, in majority of the cases, it is not practicable to identify individual consumer and pay refund to him. At the same time, the GST illegally collected and hence cannot be retained by Government.

In UOI v. Roplas Ltd. AIR 1989 Bom 183 = 1988(38) ELT 27 (Bom HC), it was suggested that in such cases, the refund due should be transferred to a Consumer Welfare Fund instead of paying it to the supplier. The fund may be used for activities of protection and benefit of consumers.

With this view in mind, concept of unjust enrichment was introduced in Central Excise Act and Customs Act w.e.f. 20th Sept. 1991.

These provisions are now being continued under GST also.

If the burden has been passed on to customer, there is no point in applying for refund of GST.

In other cases, to establish that burden has not been passed on to customer, the amount should be shown as ‘claim receivable’ in books of account and should not be charged to profit and loss account.

In Jaipur Syntex Ltd. v. CCE 2002(143) ELT 605 (CEGAT), assessee had paid higher duty and the differential amount was treated in accounts as ‘claims receivable’. This was treated as part of Balance Sheet and not charged to P&L account. It was held that it is evident that incidence of duty has not been passed on to customers. [In this case, duty was not shown separately in invoice].

In CC v. Virudhunagar Textile Mills (2008) 230 ELT 411 (Mad HC DB), differential duty on capital goods was shown as duty receivable from customs department and balance sheet with CA certificate was produced. It was held that refund is admissible.

In CCE v. Dabur India (2014) 46 GST 233 = 46 taxmann.com 359 (All HC DB), duty was paid under protest. Amount was shown as receivable. MRP/wholesale price was not increased. It was held that refund is admissible and unjust enrichment provisions are not applicable.

If tax amount is refunded by cheque or credit note to recipient, there cannot be unjust enrichment.

Application and procedure of refund

The application shall be accompanied by —

Scrutiny of refund claim and passing of order – If, on receipt of any such application, the proper officer is satisfied that the whole or part of the amount claimed as refund is refundable, he may make an order accordingly and the amount so determined shall be credited to the ‘Consumer Welfare Fund’, except where taxable person proves that he has not passed on burden of tax to another person.

Sanctioning 80% of claim on provisional basis in case of exports – In the case of any claim for refund on account of export of goods and/or services made by such category of registered taxable persons as may be notified in this behalf, proper officer may refund eighty percent of the total amount so claimed, excluding the amount of input tax credit provisionally accepted, on a provisional basis. Remaining twenty percent may be refunded after due verification of documents furnished by the applicant – clause 38(4A) of GST Model Law, 2016.

Time limit for deciding refund claim – The proper officer shall issue the order refusing or accepting refund claim within ninety days from the date of receipt of application. The “application” means complete application containing all information as may be prescribed – clause 38(5) of GST Model Law, 2016

Refund to taxable person instead of depositing in consumer welfare fund

Refund, once sanctioned, should be deposited with Consumer Welfare Fund.

However, in following cases, the refundable amount shall, instead of being credited to the Fund, be paid to the applicant [clause 38(6) of GST Model Law, 2016]

No refund except in aforesaid cases – Notwithstanding anything to the contrary contained in any judgment, decree, order or direction of the Appellate Tribunal or any Court or in any other provision of this Act or the rules made thereunder or in any other law for the time being in force, no refund shall be made except as provided in section 38(6).

Withholding refund if matter is in appeal

If an order giving rise to a refund is the subject matter of an appeal or further proceeding or where any other proceeding under this Act is pending and the Commissioner/Board is of the opinion that grant of such refund is likely to adversely affect the revenue, he may, after giving the taxpayer an opportunity of being heard, withhold the refund till such time as he may determine – clause 38(9) of GST Model Law, 2016.

No refund shall be paid to an applicant if the amount is less than rupees one thousand.

Refund is required to be filed with specified period from ‘relevant date’.

A taxable person may claim refund of any unutilized input tax credit at the end of any tax period. Such refund will be allowed only in case of exports. Even in case of exports, refund of unutilized input tax credit shall not be allowed in cases where the goods exported out of India are subjected to export duty – clause 38(2) of GST Model Law, 2016.

Refund of unutilized input tax credit shall not be allowed where the credit has accumulated on account of rate of tax on inputs being higher than the rate of tax on outputs.

Adjustment of refund if taxable person is in default

Interest on delayed refunds under GST

If any tax refundable under section 38 to any applicant is not refunded within three months from the date of receipt of application, interest at such rate as may be specified in the notification issued by the Central or a State Government on the recommendation of the Council shall be payable in respect of such refund from the date immediately after the expiry of the due date for sanction of refund under section 38 till the date of refund of such tax – clause 39 of GST Model Law, 2016.

Normally, refund is to be credited to Consumer Welfare Fund, except in few specified cases.

There shall be established by the Central or a State Government a fund, to be called the Consumer Welfare Fund.

There shall be credited to the Fund, in such manner as may be prescribed, –

(b) any income from investment of the amount credited to the Fund and any other monies received by the Central or a State Government for the purposes of this Fund – clause 40 of GST Model Law, 2016.

Utilization of the Fund

Any money credited to the Fund shall be utilised by the Central/State Government for the welfare of the consumers in accordance with such rules as that Government may make in this behalf.

The Central/State Government shall maintain or, if it thinks fit, specify the authority which shall maintain, proper and separate account and other relevant records in relation to the Fund in such form as may be prescribed in consultation with the Comptroller and Auditor-General of India – clause 41 of GST Model Law, 2016.