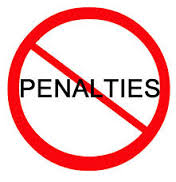 Section 271(1)(c): Whether penalty for concealment justified in case of bonafide/inadvertent/human error ?
Held-No
Price Waterhouse Coopers Pvt. Ltd vs. CIT (Supreme Court Civil Appeal no. 6924 of 2012)
“Para 18. The fact that the Tax Audit Report was filed along with the return and that it unequivocally stated that the provision for payment was not allowable under Section 40A(7) of the Act indicates that the assessee made a computation error in its return of income. Apart from the fact that the assessee did not notice the error, it was not even noticed even by the Assessing Officer who framed the assessment order. In that sense, even the Assessing Officer seems to have made a mistake in overlooking the contents of the Tax Audit Report. Para 19. The contents of the Tax Audit Report suggest that there is no question of the assesse concealing its income. There is also no question of the assessee furnishing any inaccurate particulars. It appears to us that all that has happened in the present case is that through a bona fide and inadvertent error, the assessee while submitting its return, failed to add the provision for gratuity to its total income. This can only be described as a human error which we are all prone to make. The calibre and expertise of the assessee has little or nothing to do with the inadvertent error. That the assessee should have been careful cannot be doubted, but the absence of due care, in a case such as the present, does not mean that the assessee is guilty of either furnishing inaccurate particulars or attempting to conceal its income.”

Section 271(1)(c): Whether penalty for concealment justified when income not offered to tax due to bona fide mistake ?
Held – No
CIT v. SaniaMirza (AP High Court)(ITTA of 526 of 2011)
The assessee, a renowned professional international tennis player, received an award of Rs. 30 lakhs. This was disclosed in the statement of affairs filed with the ROI though not offered to tax. The AO accepted the ROI u/s 143(1). He later reopened the assessment u/s 147 at which stage the assessee offered the said amount to tax. The AO & CIT levied penalty under Section 271(1)(c) on the ground that the assessee had furnished inaccurate particulars of her income and concealed her income. However, the Tribunal cancelled the penalty on the ground that a “bona fide mistake” had been made on her behalf by her Advocate/Chartered
Accountant and there was no concealment of income nor a furnishing of inaccurate particulars. On appeal by the department to the High Court, held , dismissing the appeal:
There is nothing to suggest that the assessee acted in a manner such as to lead to the conclusion that she had concealed the particulars of her income or had furnished inaccurate particulars of income. As the amount of Rs.30,63,310 was shown by her in the return, it cannot be said that there was any concealment. As the amount was correctly mentioned, there is also nothing inaccurate in the particulars furnished by her. The only error that seems to have been committed was that it was not shown as a capital (sic) receipt. But as soon as this was pointed out, the error was accepted and the amount was surrendered to tax. This
is not a fit case for imposition of penalty.

Section 271(1)(c) – Whether penalty leviable where expenditure disallowed due to non deduction of TDS?
Held-No
Commissioner of Income Tax IV vs.L G Chaudhary (Gujrat High Court ITA 536 of 2012)
Held that where expenditure was disallowed due to non deduction/late deposit of TDS, no penalty is leviable under Section 271(1)(c) on the ground that disallowance was at the most technical default.

Section 271(1)(c)-Whether penalty can be levied if revised ROI filed after detection but before issue of s. 148 notice ?

Held-No
RadheshyamSarda vs. ACIT (ITAT Indore) (ITA no 222/Ind/2012) (This judgment is in contrast with recent Delhi High Court judgment in case of Usha International Ltd.)

For AY 2005-06, the assessee filed a return in which he offered long-term capital gains on sale of shares. An inquiry pursuant to a survey u/s 133A was conducted. Because the assessee was unable to furnish the documents called for by the department, it filed a revised return on 22.5.2008 in which the LTCG was offered as normal income and tax was paid. The AO thereafter issued a s. 148 notice, completed the assessment on the basis of the revised ROI without any addition. The AO levied Section 271(1)(c) penalty on the ground that the revised ROI was filed after detection by the department. The assessee argued that as
the revised ROI was filed prior to the issue of the s. 148 notice, penalty was not leviable. HELD by the Tribunal:
It is the settled law that if a revised return offering additional income is filed after investigation has started but before the issue of the s. 148 notice, Section 271(1)(c) penalty is not leviable. In Sureshchand Mittal 251 ITR 9, the Supreme Court held that even where the assesse surrendered additional income by way of a revised return after persistent queries by the AO, once the revised ROI has been regularized by the revenue, the assessee’s explanation that he had declared the additional income to buy peace had to be treated as bona fide and Section 271(1)(c) penalty could not be levied. On facts, as the assessee filed a revised ROI after survey but before the issue of the s. 148 notice, penalty was not leviable.

Section 271(1)(c)- Whether penalty was leviable when shares were sold to associate concern below market price ?
Held- Yes

Where assesse transferred its majority of shares to a firm, which was closely connected toassesse at lower price vis-à-vis rate prevalent in the stock exchange on relevant date and addition was made, penalty under Section 271(1)(c) was rightly levied. The High Court upheld the judgment of Tribunal which had held that “It is not a mere case of innocent and bonafide claim of loss made by the assessee. It is also not a case of mere disallowance of loss by the AO. It is a case of false claim of excessive loss made by the assessee, though supported specious and spurious contentions.In view of the false claim, the present case squarely falls within the purview of Section 271(1)(c)(iii) & Explanation I thereto.”

Section 271(1)(c): Whether surrender of income without explanation attracts penalty ?
Held-Yes
CIT vs. MAK Data Ltd (Delhi High Court) (ITA415/2012)
A survey u/s 133A was conducted on the assessee’s  premises in the course of which certain documents belonged to certain entities who had applied for shares in the assessee company were found. The AO called upon the assessee to prove the nature and source of the monies received as share capital, the creditworthiness of the applicants and the genuineness of the  transactions. The assessee offered Rs. 40.74 lakhs as income from other sources “to avoid litigation and to buy peace“. It was made clear that in making the surrender, there was no admission of concealment. The AO completed the assessment by adding the said sum and levied penalty under Section 271(1)(c) for furnishing inaccurate particulars of income under Section 271(1)(c). This was upheld by the CIT(A) though reversed by the Tribunal on the ground that there was no material to show any concealment and even in the penalty order it was not specified as to the particular credit in respect of which the penalty was being imposed. It was also emphasized by the Tribunal that the assessee had made it clear while surrendering that there was no admission of concealment and that the offer was made in a spirit of settlement. On appeal by the Department to the High Court, HELD reversing the Tribunal:

When the AO called upon the assessee to produce evidence as to the nature and source of the amount received as share capital, the creditworthiness of the applicants and the genuineness of the transactions the assessee simply folded up and surrendered the sum of Rs. 40.74 lakhs by merely stating that it wanted to “buy peace“. In the absence of any explanation in respect of the surrendered income, the first part of clause (A) of Explanation 1 to  Section 271(1)(c) is attracted because the nature and source of the amount surrendered are facts material to the computation of total income. The absence of any explanation regarding the
receipt of the money, which is in the exclusive knowledge of the assessee leads to an adverse inference against the assessee and is statutorily considered as amounting to concealment of income under the first part of clause (A) of the Explanation to  Section 271(1)(c) and penalty has to be levied.