STEPS TO ENABLE TAX PAYERS TO COMPLETE THE MIGRATION PROCESS-2018

The GST Council, in its 28th. meeting, approved the proposal to allow migration for taxpayers, who received provisional IDs but could not complete the migration process even after activating PART A of the migration form. In order to implement the decision systematically, the following process needs to be followed.

The taxpayers who filed Part A of FORM GST REG-26, but not Part B of the said Enrolment  FORM are requested to approach the jurisdictional officers (State Trade Circular No. 10/2018 dated 03.08.2018, State Notification No. 1081 F.T. dated 06.08.2018) with the necessary details on or before 31st August, 2018. The State Nodal Officer would then
forward the details to GSTN by email for enabling migration of such taxpayers in the system.

A. THE PROCESS OF REPORTING: (FOR TAX OFFICIALS/NODAL OFFICER)
1. The respective jurisdictional officers will prepare a list of tax payers who have filed  Part A of the enrolment form i.e. GST Form REG 26 and have not filed part B of the said form.

5. The jurisdictional officer should consolidate and compile all such cases in the format  given above and send the complete list to the State Nodal Officer in a consolidated manner and not send in piecemeal fashion to GSTN by mail. The subject of mail should be “Migration cases of (Name of State/UT)”

6. Once the list is sent to GSTN (through email to gstn.nodal@gstn.org.in ) by the Nodal Officer, GSTN will examine the same.

7. After examination, GSTN will send communication (through correct email and mobile number as provided by the jurisdictional officer) directly to the tax payer intimating the details of the process for completing the migration. A status on such communication will also be shared by the GSTN with the Nodal Officer.
8. Once the Tax Payer receives the detailed instruction (as below) from GSTN through email, the tax payer will be required to complete the migration process as per the instruction so received. The process of migration is given below.

B:- THE PROCESS OF MIGRATION: (FOR TAX PAYERS)
The process of migration will be completed as per steps as detailed below. The instructions will also be issued by GSTN to the tax payers directly.
1. The tax payer will receive intimation through email and mobile number from GSTN on the number/email communicated by the jurisdictional nodal officer.
2. On receipt of intimation, the tax payer will be required to apply for a new registration on GST portal (https://www.gst.gov.in/) in the “Services” tab. If the tax payer desires, he may provide new email ID and Mobile Number while submitting the form.
3. Taxpayer is required to select under Business Details Section of the New Registration Form the “Reason to obtain registration”= “Others” and in the text box opened “Application for migration under Notification No 31/2018” need to be mentioned.
4. Under the Business Details section “Indicate Existing Registration” taxpayer is required to mention his/her existing GSTIN on which migration is requested. Taxpayer is also required to mention his/her registration details under earlier Acts from where the migration is sought. “Date of commencement of Business” and “Date on which
liability to register arises” should be entered as 01/07/2017 as mentioned below:- 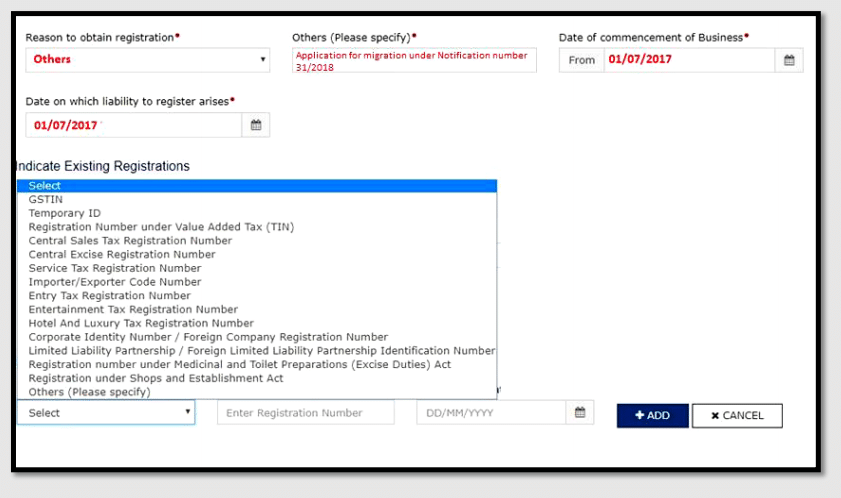 7. Once the application is approved and registration is granted, the tax payer will receive a mail in the given email ID with the new GSTIN and Access Code (initial password).
8. Upon successful approval of the New Registration application and email shall be issued by GST Portal containing the new GSTIN and access token. However, it is important to note :

a. In case the taxpayer has been issued the same GSTIN as was issued to him/her at the time of migration, taxpayer may activate their GSTIN with the token as received in the email. Taxpayer may proceed ahead.
b. However, it is possible that the taxpayer may get issued a GSTIN with different entity code (13th and 14th character of GSTIN) because of previous existing record. Should the taxpayer get a different GSTIN other than the earlier one on which migration is sought, it is important that the tax payer MUST NOT activate the new GSTIN at this stage.
c. In that case the tax payer will be required to send the new GSTIN, the access token, ARN of the application for new registration, Old GSTIN (PID) to GSTN in the mail id:- migration@gstn.org.in

d. After verification of details, GST Portal shall issue the same GSTIN and Access Token as requested by the taxpayer in the Registration Form.

9. The steps followed above will complete the process of migration and the taxpayer will be able to generate his Registration Certificate. 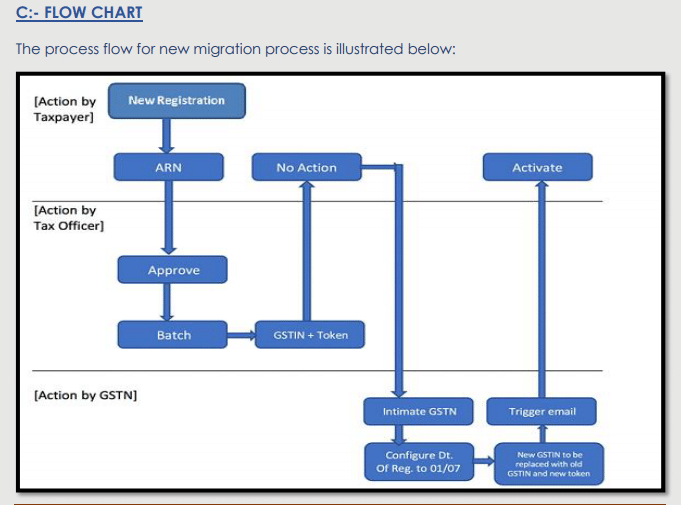