Tax Deduction at Source (TDS) is a system, initially introduced by the Income Tax Department. It is one of the modes/methods to collect tax, under which, certain percentage of amount is deducted by a recipient at the time of making payment to the supplier. It is similar to “pay as you earn” scheme also known as Withholding Tax, in many other countries. It facilitates sharing of responsibility of tax collection between the deductor and the tax administration. It also ensures regular inflow of cash resources to the Government. It acts as a powerful instrument to prevent tax evasion and expands the tax net, as it provides for the creation of an audit trail.

Under the GST regime, Section 51 of the CGST Act, 2017 prescribes the authority and procedure for ‘Tax Deduction at Source’. The Government may order the following persons (the deductor) to deduct tax at source:

(a) A department or an establishment of the Central Government or State Government; or

(b) Local authority; or

(d) Such persons or category of persons as may be notified by the Government on the recommendations of the Council.[ Refer Notified persons Notification No 50/2018 Central Tax : TDS provision of Section 51 of CGST act enforced from 01.10.2018 ]

The tax would be deducted @1% of the payment made to the supplier (the deductee) of taxable goods or services or both, where the total value of such supply, under a contract, exceeds two lakh fifty thousand rupees (excluding the amount of Central tax, State tax, Union Territory tax, Integrated tax and cess indicated in the invoice). Thus, individual supplies may be less than Rs. 2,50,000/-, but if contract value is more than Rs. 2,50,000/-, TDS will have to be deducted.

However, no deduction shall be made if the location of the supplier and the place of supply is in a State or Union territory, which is different from the State, or as the case may be, Union Territory of registration of the recipient.

The earlier statement can be explained in the following situations:

(a) Supplier, place of supply and recipient are in the same state. It would be intra-State supply and TDS (Central plus State tax) shall be deducted. It would be possible for the supplier (i.e. the deductee) to take credit of TDS in his electronic cash ledger.

(b) Supplier as well as the place of supply are in different states. In such cases, Integrated tax would be levied. TDS to be deducted would be TDS (Integrated tax) and it would be possible for the supplier (i.e. the deductee) to take credit of TDS in his electronic cash ledger.

Thus, when both the supplier as well as the place of supply are different from that of the recipient, no tax deduction at source would be made.

A TDS deductor has to compulsorily register without any threshold limit. The deductor has a privilege of obtaining registration under GST without requiring PAN. He can obtain registration using his Tax Deduction and Collection Account Number (TAN) issued under the Income Tax Act, 1961.

A TDS certificate is required to be issued by deductor (the person who is deducting tax) in Form GSTR-7A to the deductee (the supplier from whose payment TDS is deducted), within 5 days of crediting the amount to the Government, failing which the deductor would be liable to pay a late fee of Rs. 100/- per day from the expiry of the 5th day till the certificate is issued. This late fee would not be more than Rs. 5000/-. For the purpose of deduction of tax specified above, the value of supply shall be taken as the amount excluding the Central tax, State tax, Union
territory tax, Integrated tax and cess indicated in the invoice.

For instance, suppose a supplier makes a supply worth Rs. 1000/- to a recipient and the GST @ rate of 18% is required to be paid. The recipient, while making the payment of Rs. 1000/- to the supplier, shall deduct 1% viz Rs. 10/- as TDS. The value for TDS purpose shall not include 18% GST. The TDS, so deducted, shall be deposited in the account of Government by 10th of the succeeding month. The TDS so deposited in the Government account shall be reflected in the electronic cash ledger of the supplier (i.e. deductee) who would be able to use the same for payment of tax or any other amount. The purpose of TDS is just to enable the Government to have a trail of transactions and to monitor and verify the compliances.

Consequences of not complying with TDS provisions 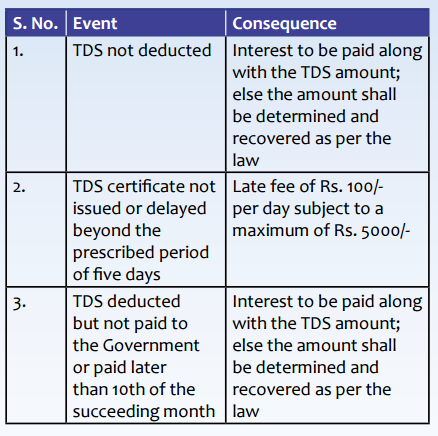 Any excess or erroneous amount deducted and paid to the Government account shall be dealt for refund under Section 54 of the CGST Act, 2017 . However, if the deducted amount is already credited to the electronic cash ledger of the supplier, the same shall not be refunded.