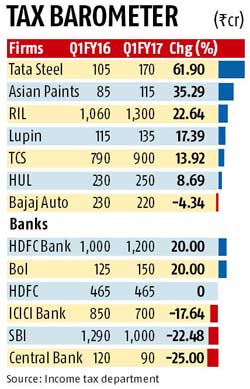 The advance tax payments by a sample of the top companies, excluding banks and finance companies based in Mumbai, have seen good growth for the first instalment on

Advance tax paid by Tata Steel was up 61.9 per cent in the first quarter of FY17, compared to last year.

Other private sector banks have done better on the advance tax payment. Both HDFC Bank and YES Bank had a 20 per cent YoY increase in their advance tax outgo at Rs 1,200 crore and Rs 205 crore, respectively.